The Israeli Congress’ initiative ‘Positive Reinforcement’ in cities marked “red” continues. As part of this operation, instead of handing out fines to those who do not wear a mask, ‘positive tickets’ are given to those who do.

The operation, which grew as part of the ‘Agreements Council’ held by the Israeli Congress in Ashdod, is taking place in cities throughout Israel, when local residents from different communities – secular, religious and ultra-Orthodox, hand out certificates of appreciation to passersby who wear masks, for being responsible and helping stop the spread of COVID-19.

The positive approach this initiative presents, has already been adopted by various parties, including youth movements and even by the Israeli police.

A Crisis is an Opportunity

The crisis caused by COVID-19 has deepen existing tensions between some of the various communities in Israeli society. This process is particularly evident in the more diverse cities, where myths about communities who are perceived as ‘responsible’ for the spread of coronavirus have created difficult dynamics. The increase in morbidity, as well as the many restrictions imposed on the residents of these cities only intensify the economic, health and social challenges they face.

“An identity of a group forms itself out of the disagreements it has with other groups”, explains Dr. Gilad Wiener, the Executive Director of the Israeli Congress, “the encounter between the different groups advances a different discourse between them, one that emphasizes the commonality rather than the separator, one that encourages personal responsibility and following health codes and thus increases the sense of mutual support”. 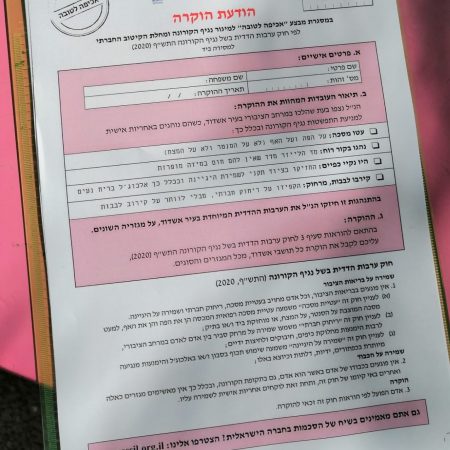 The Israeli Congress: Handing out ‘tickets’ to fight COVID-19.

“This is a challenging time for all of us, but in this crisis lies an opportunity to develop partnerships between the different parts that make up the Israeli mosaic”, Wiener continues, “even if we disagree on everything, we must remember that we have more in common than that which divides us”.

The Israeli Congress is a joint venture of Bar-Ilan University and the Menomadin Foundation, established to address the central challenge of Israeli society today: the ongoing tension between the Jewish identity and the democratic identity of the state of Israel, with the key to bridging this fundamental tension being a large-scale public process of building agreements, accompanied by in-depth academic research.

The ‘Positive Reinforcement’ initiative is held with the cooperation of local authorities and with the support of the UJA Federation New York.

Watch the video: Operation Positive Reinforcement in Ashdod, in cooperation with the Municipality of Ashdod, Hayechida and Plugta.