The “Day After” Coalition Presents: Start-up Nation Arrives in Rahat

In early 2020, shortly after it became evident that the COVID-19 pandemic was not going to pass quickly, the Menomadin Foundation established a coalition of organizations to assist the Israeli authorities. The coalition has set an ambitious goal – to develop a “method” for solving socio-economic problems in local authorities, which can be replicated and expanded. The coalition was given the name the “Day After” and was joined by The Or Movement, Social Finance Israel, the Federation of Local Authorities and the Department of Human Capital Planning and Development of Local Authorities in The Ministry of Interior.

Each member of the coalition has brought to the table a unique specialization. The Menomadin Foundation leads the Blended Finance Approach, with which it strategically uses government budgets and funds from philanthropic sources to recruits private investors for social purposes.

The Or movement developed the “Neighborhood as a Community” model, which harnesses activists and residents to projects and increases commitment among stakeholders. Social Finance Israel specializes in measuring the efficiency of impact-based projects. The the Federation of Local Authorities is responsible for contacting the authorities. While the Department of Human Capital Planning and Development of Local Authorities in The Ministry of Interior specializes in training the manpower required to implement the project.

From Neighborhood to Country

The coalition began a pilot in four local authorities: Rahat, Netivot, Tiberias and Safed. In each authority, a steering committee is established, with representatives of the local authority and of the various residents. The committee chooses the challenge to be addressed by the coalition, preferably one that was particularly intensified during COVID-19.

After the challenge is chosen, a Call For Proposals is published to start-ups, social businesses and nonprofits, inviting them to suggest unique projects that can provide a solution. At the same time, companies, businesses, institutions, and nonprofits in the area are contacted to assist in financing or in other ways. The chosen project is implemented in one neighborhood, and over the course of 18 months a measurement of the resulting impact is carried out. If the project proves itself successful, the methodology developed will be implemented in other cities in Israel and abroad.

In the Bedouin city of Rahat in the Negev, the steering committee has decided to focus on the problem of digital literacy, which was felt even more keenly during COVID-19 quarantine period. During 2020 students in the education system spent long months learning via Zoom, instead of in classrooms. For the residents of Rahat, the new normal was particularly problematic. Many families didn’t have enough computers to enable remote learning for all children. In addition, many adults do not have enough computer access and know-how to help their children. In the realm of employment, as well, the pandemic has greatly exacerbated extant problems – the switch to telecommuting was very problematic for many in the city, who are unaccustomed to digital working.

“Changing Things For The Better”

One of those involved is the head of the youth and recreation center in Rahat, Fouad al-Ziyadne, who says: “We held meetings and discussion, and we’ve decided that the most important issue to us, that we wish to promote, is that of digital literacy. This has been a very problematic issue in the Bedouin sector in general, and in Rahat in particular, for many years now, but the pandemic made it much worse. We weren’t prepared for it and the new situation that formed just increased the existing gaps. We intend to soon publish a Call For Proposals, and find the best partners and initiatives, so that we can improve the situation as quickly as possible”. 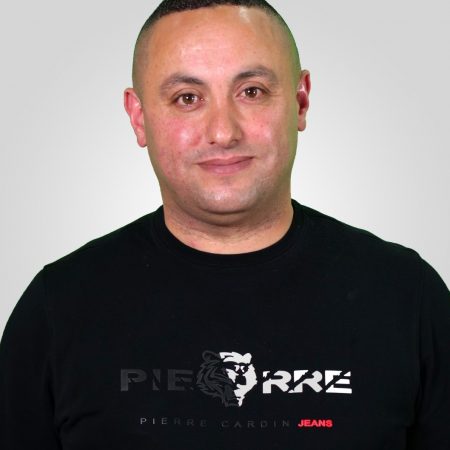 Menomadin Foundation initiative, the “Day After” Coalition: a sustainable long lasting solution for social-economic challenges in local authorities. Photo: Fouad al-Ziyadne, Head of the youth and recreation center in Rahat

According to al-Ziyadne, “We have to find a way to empower our young people, to take the good things that we have here, and build a future for them. Rahat can and should be a strong and leading city in the Negev, with a population that has a variety of employment options in occupations suited for the future economy. I want each and every young man and woman to have the option to choose a path that suits them, and to fulfill their dreams. For that to happen, we have to strengthen the city’s infrastructure, the access to computers, and their computer and tech skills and those of older people around them. I grew up in an unrecognized village, and I know the problems and difficulties firsthand. But my job as a community leader is not to cry over what we don’t have, but to take responsibility, and along with my fellow partners, dream about and create another future, make it so that our population are equals among equals”.

Al-Ziyadne says that “one of the advantages of this new initiative is that it’s a partnership based on the people of the city. A lot of times we get budget with directive and instructions from above, which aren’t always suited to our people, and that’s inefficient. You have to harness the population and work with it. Now we get a lot of assistance and professional support. That’s the right way to build something new that will change things for the better.

Ronnie Falmer, Director of the Or Movement, adds that “Rahat is a leading city in the Negev, with 70 thousand residents, it’s the largest Bedouin city. The median age there is 14 and the school dropout rate is very high, around 12%, three times that of the Jewish population in the area. The city’s youth are at a difficult starting point. The ray of light is that we have people to work with, and there’s a great desire in the city to move forward. It’s a city with many challenges, but also a lot of hope. I’m glad to say we have people to work with and we can provide solutions through working with people in the field and partners who help with thinking, with developing responses to problems and implementing them. I believe that a combination of sectors – national and municipal governments, business and social organizations, we can create a true revolution that will leave a lasting impact for years and build a better Rahat, a better Bedouin sector, and a better Negev”.

Dr. Merav Galili, CEO of the Menomadin Foundation, summarizes: “When the coronavirus crisis first broke out, I sat with Haim Taib, president of the Menomadin Foundation, and we tried to think how the foundation can help. We looked at all sorts of avenues such as strategically focused philanthropy or impact investments, and finally decided to take the cross-sectorial model of cooperation which the foundation promotes to solve social challenges, and apply it to this mega social crisis caused by the pandemic. Now, a year later, we see how crucial the cooperation between various sectors has been, and how it is that cooperation that guarantees that the solutions we implement will be sustainable and continue the impact even after the foundation’s role has ended. Collaborations are important both at the national and local levels. Particularly crucial is the involvement of the Ministry of the Interior, through its department for developing the human resources at the municipal level, and as such can guarantee that municipal staff will learn the model we are developing and join the effort to implement it. In addition, only the Ministry of the Interior can guarantee the up-scaling of the project throughout Israel”.