Kibbutzim and Youth Villages in Africa, a groundbreaking project aiming to generate agreements within Israeli society, and a housing foundation that will free NGO’s from the need to fundraise – just to name a few of the projects on the agenda of businessman Haim Taib, President of Mitrelli Group and the Menomadin Foundation. How did a boy from Moshav Olesh become an international businessman who has touched and changed the lives of so many people?

Zionism in Africa? It’s a Thing!

Just by looking at, you wouldn’t know that Haim Taib is an international businessman, and when speaking of well-known Israeli businessmen, you are unlikely to hear his name come up. Nevertheless, Taib has made his mark and continues to do so. As Irit Savion-Vidergorn, the former Israeli Ambassador to Angola, put it: “Haim Taib and Mitrelli make a good name for the State of Israel with numerous successful ventures in the fields of communication, agriculture, and education for society at large.”

Haim, while you are involved in such extensive commercial and social ventures, your work and reputation are almost unknown to the public. Why?

When I first started, I did not feel the need to be identified with my work. In time, as my business projects began to influence the lives of so many people, I understood that I should reveal the way I manage myself in both business and day-to-day tasks. I now consider it vital for people to get to know me—my roots, heritage, and values are inseparable from my work and projects.

You say vital. Why do you think this is so important?

I believe that getting to know me and my approach to business establishes trust, and trust is the critical first step towards success in both business and social ventures.
As a child, I remember walking around the Mahane-Yehuda market in Jerusalem with my grandfather. People would approach him and he would give them money before they even asked. With time, I came to understand his greatness; he detected a need and gave, without being asked. I soon found from my own experience that being the first to recognize a need and make a generous gesture without being asked is fulfilling in itself, and moreover, it yields trust in return. Once this trust is established, the foundation is set for a promising collaboration.
When presenting a groundbreaking venture that will impact the lives of millions of people, you must first establish this trust with the public; to do so, you have to allow people to get to know you.

Your business projects significantly influence the lives of many people. Can you give me an example of such a project?

One of the ventures I am proud of is Aldeia Nova––the new village. The idea came to me as the civil war in Angola was ending, and mercenary soldiers found themselves unemployed. Inspired by Israeli Kibbutzim and Moshavim, I invited groups of veterans and their families to share their lives together in rural areas with agricultural training. Under this model, the villagers had both housing and livelihood, earning their living cooperatively off of industrialized agriculture. Another Israeli model I imported to Angola was the Youth Villages in a project called Cabiri.

It was not at all planned. I began my career growing turkeys in Israel. The company I was working for at the time sent me to Portugal to apply our accumulated experience and knowledge. From Portugal, I went into business in Angola, a special country I grew to love. I wrote all about my unexpected journey in my book Pursuing the Dream, where I tell the story of how I moved from one industry to another—vehicle protection, communications, and projects with the airport authority—until, as it so happened, I found my calling as the head of several companies under Mitrelli Group, today one of the major infrastructure suppliers in Angola.

Some people would call this “Zionism in Africa”–is this what you are doing?

De facto, my work in Africa is contributing to the identification of Israel with technology, problem-solving, creativity, and above all—reliability. I am proud to bring the best of Israel to Africa while making a good name for the State of Israel—my beloved homeland.

Deep-Rooted in the Soil

Glancing over Taib’s business diversity in water infrastructure and agriculture, a common denominator becomes apparent: a connection to the land.

Do you see any connection between your childhood in Moshav Olesh to your involvement in so many agriculture projects?

Ultimately, we all return to our roots. I believe that a person is born with specific genetics and later absorbs the surrounding environment, especially in the first years of their life. Throughout life, one can walk many different roads, but around the ages of 35—40, he or she will find their way back to their childhood and special blend of genetic and environmental influences. This happened to me as well: around that time in my life, I got involved in many agricultural ventures. I do not think this was an accident; it was rooted in the love I had for both soil and farm work as a kid.

Tell me about your childhood in Olesh

I was born in Jerusalem but lived most of my childhood in the Moshav. We started out with three cows, which my father sold and bought some sheep in their place. In addition, he also grew vegetables. I remember walking with him to the synagogue on the Sabbath, the only time I could really be with my dad because he worked very hard making a living for us. As an adolescent, I shared this burden and helped to support my family, with every cent I earned going to my mother, of course.

Which jobs did you hold as a young boy in Olesh?

I installed drippers in citrus plantations and vegetable fields. I developed a method to cover the greenhouse with nylon. Using my approach required fewer men for the job, reducing costs and saving money. I trained my schoolmates in this method, which, in fact, was my first profitable business.

It seems wherever you are, you do not settle for the status quo, be it with greenhouses in your moshav, or rebuilding a country in Africa

It is true. I admire innovation and vision both in business and in social ventures; combining them allows you to enhance your impact. 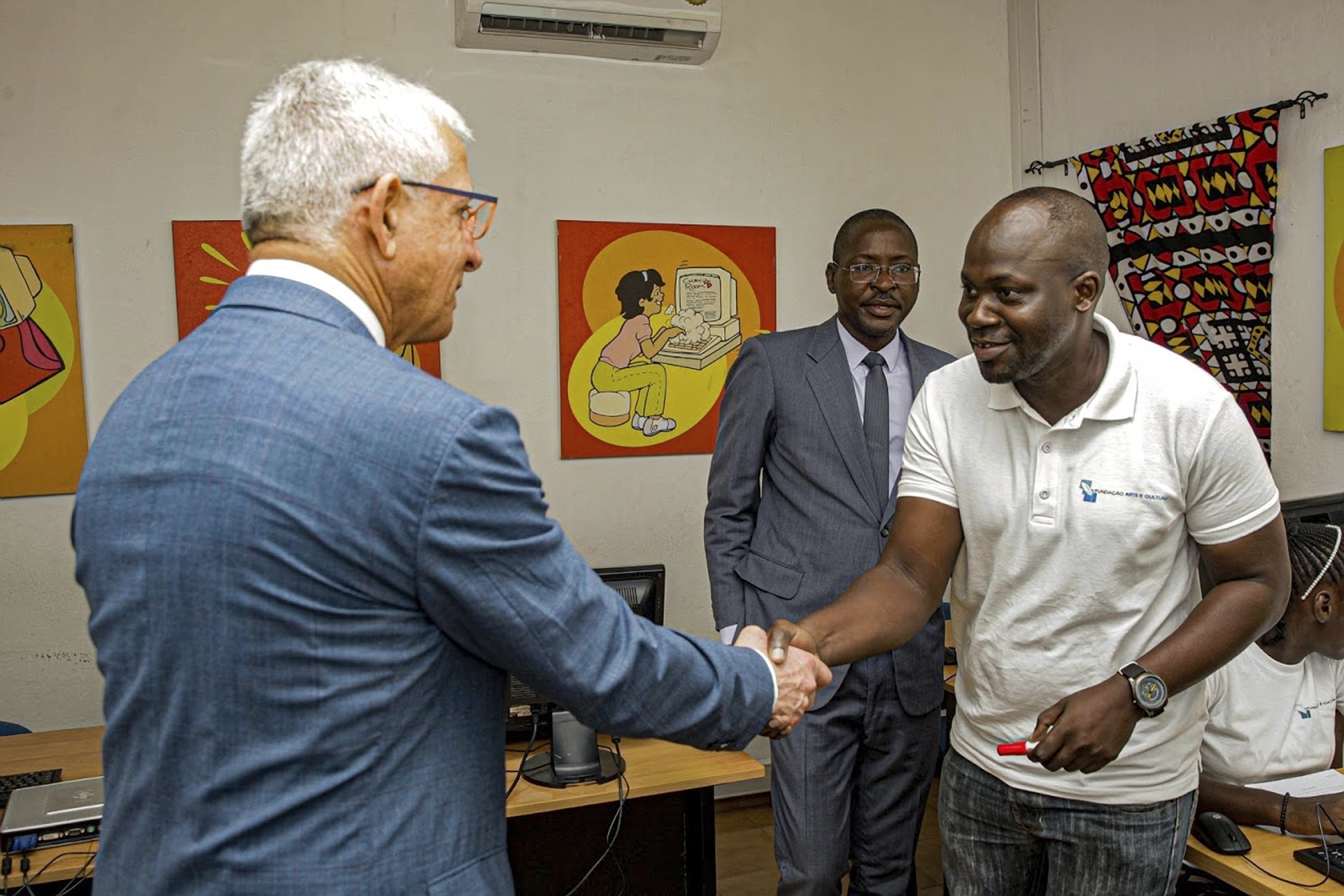 Taib’s businesses have a unique and significant impact on the societies and environments in which they operate. This could be the result of the locations of his businesses (in Africa), or the result of his personality, but is most likely a combination of both. Working in Africa comes along with a host of challenges, alongside opportunity to effect real change. Taib’s ventures, to name a few, have included creating a water supply for remote villages, installing electricity and communication facilities, building affordable housing, and even a hospital. Aside from the business opportunity that lies in these projects, the social, health, and economic implications and benefits are invaluable. Nevertheless, Taib is not finished: a year ago, he established the Menomadin Foundation.

What drove you to establish the Menomadin Foundation?

My business projects indeed have a social effect. It is also true that for many years now I have been involved with philanthropic work. One day, it suddenly occurred to me that the whole is greater than the sum of the parts, causing me to bring all of my activities—both business and social—under one roof. The purpose of Menomadin is to maximize our potential, combining our diverse activities under a unified vision. Menomadin leverages the knowledge my teams and I have gained through decades of experience to better impact new and existing ventures. Fortunately, only one year into the establishment of Menomadin, this has already proven to be successful; our scope of activities is expanding de facto, as is our influence, and I believe this trend will only continue to grow.

So, what exactly is the Menomadin Foundation?

The Menomadin Foundation works to ignite positive social change through wide-scope projects in Israel and in Africa, and even globally. We combine donations with impact investments that focus on social benefits and sustainable development. Instead of just giving money to important causes, through Menomadin we become partners in these causes. Menomadin gives fishing rods alongside fish, and on top of that, we make sure those who receive the fishing rods have been taught how to use them. If successful, this model should enable us to give more and more fishing rods.

Can you give an example?

I’ll tell you about one small project aimed to help Angolan women gain economic independence. We initiated this project while Angola was in ruins after the civil war. Young women who chose to participate learned how to sew and how to sell their products. How do you do that with no electricity? With manual, old sewing machines. We brought such sewing machines to an orphanage, provided supplies, materials, and training.

So, you gave them the fishing rods and fish

Yes, but that was only the beginning. Once the women learned to sew, we helped them to start their own collaborative business. Together, we created a sales operation and built a suitable financial model. This business soon became a cooperative with dozens of female employees. Through the living earned in this cooperative, these women were able to provide for themselves and their families, giving them a stable, meaningful life. We similarly provide the same tools for many other projects. For example, we are in the process of establishing a housing foundation for people with special needs. The goal is to enable non-profit organizations to purchase housing for young, disabled people. Rather than considering them as donations, we assign funds for this foundation as impact investments, aiming to make it sustainable. The ultimate goal is for this fund to operate independently of Menomadin, freeing us up to move on to the next cause. When one of our projects branches off on its own, I always remain involved and in touch, making sure the organization can keep on thriving.

The Israeli Congress: In the Name of our Children

What ventures does Menomadin have in Israel?

We have chosen to focus on three distinct areas with a common goal—to strengthen the State of Israel and its society: First, empowering people with special needs; second, leadership development in both the Bedouin and Druze sectors; and third, to bring together Israel’s divided, conflicted society. The Israeli Congress, which works in collaboration with Bar-Ilan University, leads this cause. Its goal is to generate a system of agreements through dispute resolution tools in both the business and the academic worlds. I saw with my own eyes how effective these tools are, and there is no reason why they would not be as effective in resolving socials disputes.

Is it not too late? Is the Israeli society not beyond repair?

I remember the “good old” Israel—the Israel that was less conflicted and much more tolerant and accepting. We lost our way, and our society is divided; the different sectors have ceased talking to one another and have little consideration for their fellow neighbors. Nevertheless, I am convinced that we can get back on track, and the Israeli Congress can be the force that can get us there. It will not happen in a year, nor in two, but this, not a sprint, it’s a marathon: In the long-run, I believe it will make a difference.

So there is a chance for our children to grow in a better world, in a much more united and harmonious Israel?

The next generation is exactly what motivates me in my overall activities and especially in the Congress. By the way, the Menomadin Foundation is an acronym of my children’s names: Meital, Noa, Maayan, Maya, David, and Din. My children drive me to try to change the world, to make it a better place for them and for all of us.