The Eyes Say it All

The COVID-19 pandemic has impacted hospitals around the world. Among other challenges, doctors had to deal with many patients on ventilators, who had difficulty communicating with physicians and family members. Many of them were aided by EyeControl, an Israeli company that has developed a unique solution which allows ventilated patients, among others, to communicate through a head-mounted device operated solely by eye movements.

“The past 18 months, since the outbreak of COVID-19, have been very challenging for doctors and ventilated patients”, says Or Retzkin, one of the company’s founders. “This is a very complex time, which is unfortunately not over. We are glad that the system we have developed has been adopted by several hospitals to test its efficiency both in the ICU and ventilated recovery wards. I was happy to see many cases in which it helped doctors and patients. One of the most memorable cases was a patient at Beilinson Hospital who couldn’t communicate with his family. He was sedated for weeks and once he awoke, he received loving messages from his children through the system, and was very moved. When asked later about his experience using the system, he and his family all replied that “any patient in such a condition should have access to an EyeControl”. 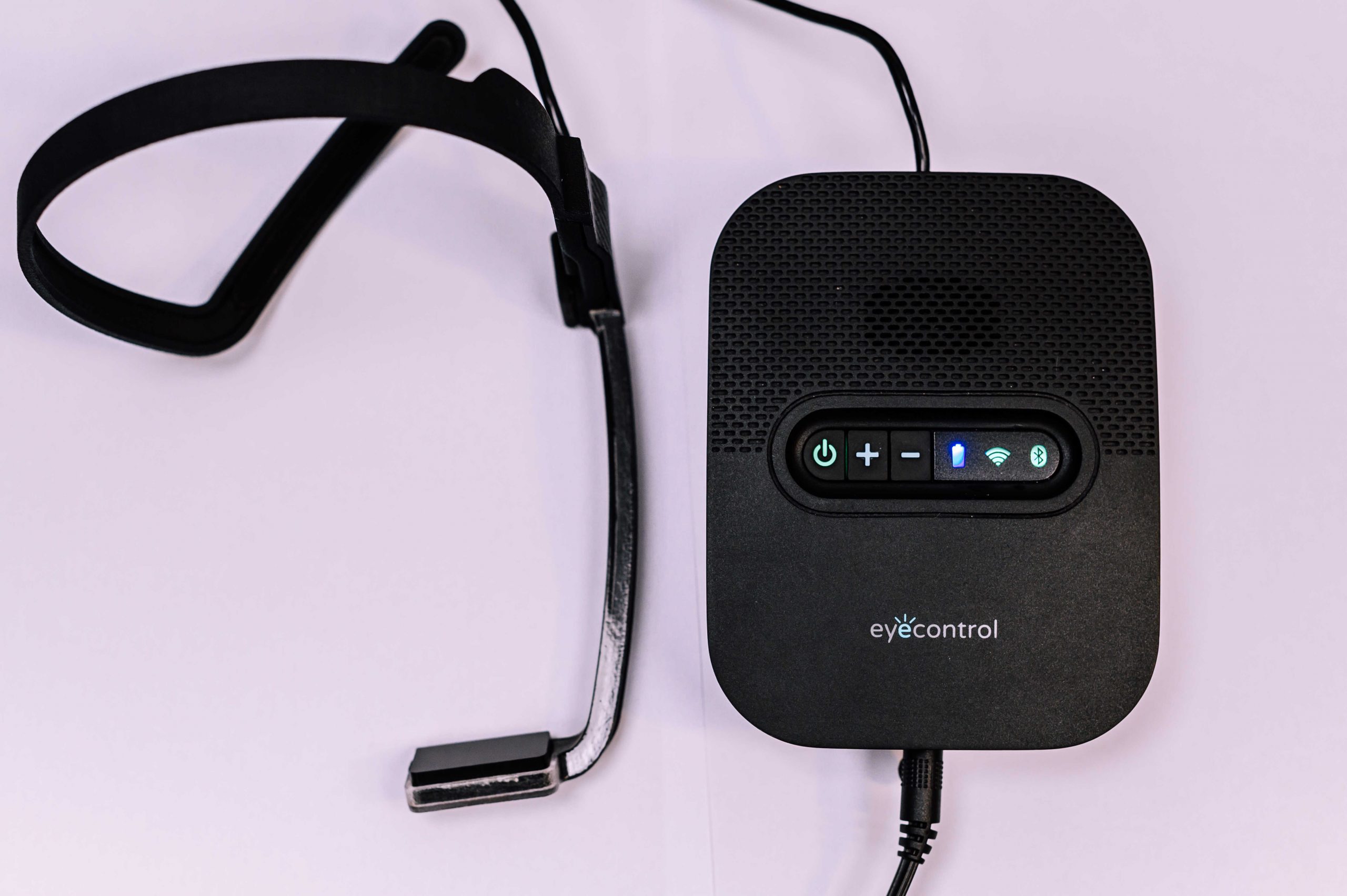 The company was founded with the mission of improving quality of life for amyotrophic lateral sclerosis (ALS) patients, who have difficulty communicating with others.
Shay Rishoni was a senior military colonel (rev), athlete and businessman, who suffered from ALS, which caused him gradual paralysis, until his passing in May 2018. As his condition deteriorated, and he struggled to communicate with his surroundings, he used a special computer program that enables patients in his condition to communicate using the motor skills they still have, usually eye motions. Alongside its advantages, the existing system had several operating limitations. Among other things, at night, around bedtime, the computer would need to recalibrate. One time, Shay recalled that while sleeping, he suddenly had trouble breathing, and almost choked – unable to call for help. The difficulties he experienced motivated him to find a 24/7 communication solution. Shay, former CEO of Prize4life, Israel’s ALS non-profit organization, joined together with Or Retzkin, whose grandmother succumbed to ALS, and Itai Kornberg, whose best friend passed away from Duchenne Muscular Dystrophy. Together, they decided to tackle the challenge.

The project began as a volunteer initiative, and when it became commercial, the ALS non-profit received company shares. Along the road, many partners have joined the company, investing over 15 million dollars thus far, out of faith in the potential impact of the product. Among these are Benslie International Ltd, Connecticut Innovations, Zora Ventures, Impact First, Rimonci Capital, as well as private investors such as Benny Levin and Itzik Danziger. In addition, the company is supported by SoftBank’s Creator Fund.

Dr. Merav Galili, CEO of the Menomadin Foundation, says: “EyeControl is one of the most promising firms in Israel in the field of medical equipment. As such, we were glad to invest in it early on, aiming to help it develop and market the system, which makes a real difference in the lives of people most in need. In addition, the company has great and obvious business potential in the field of medical devices – and that’s a great example of how impact investments can produce both social and financial benefit”.

Eli Polak, Menomadin Foundation’s appointed board member, says: “Working with the EyeControl team and entrepreneurs is fascinating. Their ability to identify a new medical need and adjust their technology accordingly is one of the company’s strengths. During COVID-19 this was nothing short of a revolution, both from a business point of view and in terms of the potential for social impact”.

“The connection with the Menomadin Foundation happened through several avenues”, says Retzkin. “The foundation became aware of the company when we presented at one of the annual impact conferences, and concurrently we had a prior acquaintance with one of its representatives. Later on, we met with Haim Taib, President of the Menomadin Foundation, in England, and with the rest of the Foundation’s team, and the decision to collaborate was made. Eli Polak, the board member appointed by Menomadin, has rich experience in the worlds of tech and business, and contributes a great deal to the company’s progress. It’s a unique partnership, with wonderful people, and I’m glad that we’re on this journey together”. 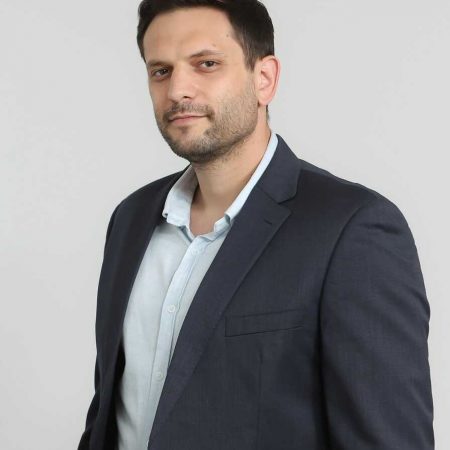 Tell Us, How Does the System Works?
“The EyeControl is the first wearable, screenless, assistive communication device. AI-powered eye-tracking technology enables Locked-in individuals and ventilated patients — who can’t speak — to communicate using only intuitive eye movements. The device consists of a lightweight head mount with an eye-tracking camera, bone conduction earpiece and small processing unit with a speaker. The user controls audio menus with pupil movements that are read by the camera and transmitted to the processing unit. Once the user picks, it is converted to speech via the output speaker or connected Bluetooth device.
The EyeControl is the first assistive communication device that enables personalization based on the user’s precise range of eye motion, even at advanced stages of movement deterioration. Cloud services facilitate remote access, including content editing and user preferences.
In addition, the system allows for input in one language and output in many others, for communication with caregivers who do not speak the patient’s language.
Current communication solutions are cumbersome and require extensive training and calibration. The EyeControl requires no calibration and with an average training time of less than twenty minutes it is an ideal solution for at home and in hospital use. Additionally, in contrast to screen-based technologies, the EyeControl’s camera is positioned at nose level, allowing eye contact during communication.
The device also grants user privacy, the bone conduction transmits to the patient only, before broadcasting the selected communication, as opposed to other products that display/project data openly. The system has many advantages compared to other existing solutions – among other things, it is intuitive and easy to use, portable, and available round-the-clock”.

What kind of patients can it help?
“The system was originally developed to allow ALS patients to communicate using their eyes, without computer screen dependency. In the past two years, we adapted it to the needs of ventilated patients, to allow them to communicate with family members and hospital staff. During the COVID-19 pandemic, the need for remote, real-time communication between ventilated patients, medical staff and family members has become crucial. Such communication allows for more efficient medical treatment while maintaining staff safety, and it helps ventilated patients be more alert and aware of their surroundings. In this manner, the system contributes to shorter lengths of stay and reducing patient trauma by improving the overall healthcare experience. Hopefully, it will also help reduce one of the most problematic clinical phenomena in hospitals – Delirium – a state of confusion and hallucinations that may appear in patients who are struggling to communicate with their surroundings, which causes their condition to deteriorate. The technology can also help accident victims, patients suffering from head injuries, stroke, cerebral palsy, and others with physical and verbal difficulties in communicating”.

Although the company has only existed for five years, it has already achieved great financial and medical success. Recently, EyeControl was awarded the 2020 Genesis Prize, hosted by the Israeli President in Jerusalem. In addition, EyeControl was featured in Forbes Magazine’s first Israel edition, Small Giants, a segment highlighting stand-out startups that have successfully turned their ideas into growing businesses. EyeControl is the only commercial Israeli company selected to serve as European Innovation Council (EIC) National Champions; the EIC is Europe’s most ambitious innovation initiative, investing in breakthrough technologies. This is subsequent to being the first Israeli company awarded both the European Commission’s Horizon 2020 SME Instrument Phase-2 program and the EIC Accelerator.

The EyeControl device is FDA listed, CE marked, ISO certified, AMAR and MAKAT registered, and HIPAA/GDPR compliant; it is federally reimbursed through the Israel Health Service Basket, the UK NHS Supply Chain, and US Medicare and Medicaid codes.

What are the main challenges facing you now?
“Challenges exist on many levels. One of the keys, in my opinion, to meaningful and correct conduct in the face of challenges, is to surround the company and us as entrepreneurs, with good, experienced people who have faced similar challenges. Learning is endless, both for us and at times for them too.
Our goal for the next few years is to continue expanding our medical facility activities and enable communication for as many patients and their loved ones as possible, in order to maintain a hospitalization process that is as humane as possible. We believe that the system has the potential to change the way ventilated patients interact with their families and with medical teams around the world, and we are continuously developing the system to bring them the best solution on the market”.