Want to change everyone’s life for the better? Join the “Local Agreement Councils”

The Coronavirus pandemic has gravely affected the world, and Israel in it. The pandemic has caused more than health and economic damage. The severe restrictions imposed upon the public, and the varying response to them by different sectors of the population, have led to sharp divisions among the public. The media and politicians pounced on these fault lines, which only exacerbated the tone of the debate. Discourse on public media has become more brutal than ever, and at times it has seemed that Israeli society has never been so polarized.

It is precisely at such a complex juncture that the immense importance of the “Local Agreement Councils” project, initiated by the Israeli Congress, can be most keenly appreciated. The project is intended to promote a discourse that encourages agreement between various groups in Israeli society. All this, while creating frameworks for dialogue between activists and residents, designed to understand the sensitivities and the needs of the other side.

The project was born last year to a more veteran parent – a national council that deals in dialogue and search of solutions in issues of dispute between secular and religious Jews. After thorough research, it was revealed that many of the citizens prefer to find local solutions to confrontations surrounding these issues, through reaching agreements between residents. This, without relying on dictates from above – be it from the government, the Knesset, or even the municipal authorities.

The local project was launched during 2020, in five regions in Israel. Each council elected two leaders – one ultra-Orthodox (“Haredi”) and the other Secular. Alongside these two, each council included several participants, from different population groups in that area. The councils met throughout the year, physically and virtually (according to the restrictions), for discussions on a series of topics that concern the residents, in an attempt to reach agreements and create joint activities to improve the quality of life for the area’s inhabitants.

The activities, which were conducted in conjunction with the “Plugata” organization, took place in Jerusalem, Rehovot, Modi’in-Modi’in Illit, and in the Bnei Brak-Ramat Gan-Givataim area. The councils debated a wide variety of issues throughout the year, among them of course dealing with Corona.
Alongside the discourses, the councils launched a few successful field operations. Thus, for example, in Ashdod, the council organized an operation to “positive tickets” to the people of the city, for adhering to Coronavirus restrictions. The pandemic has greatly worsened the phenomenon of hate speech – particularly against a backdrop of media reports on violations of the restrictions at Haredi schools, which caused bitter feelings among the public. “We tried to think together, how on one hand to convey adherence to the restrictions, but on the other hand, not to act like a disciplinary entity. What we ended up doing was just to walk the streets, residents to residents, and anyone who was obeying the rules received a positive report from us”, says Nissim Kakoon, Deputy Mayor and member of the Agreement Council, about the Ashdod project.

In Jerusalem, the Council launched an unusual art project that adorned the light rail stations in the city, promoting values of tolerant discourse among the disparate groups that make up the vast city, who come from such different backgrounds – Arabs, Haredi and Secular. In the city of Rehovot the Council initiated volunteer work to benefit the elderly in town. “The initiatives that came out of the project left us breathless”, says Daniel Candler, Director of Plugata. 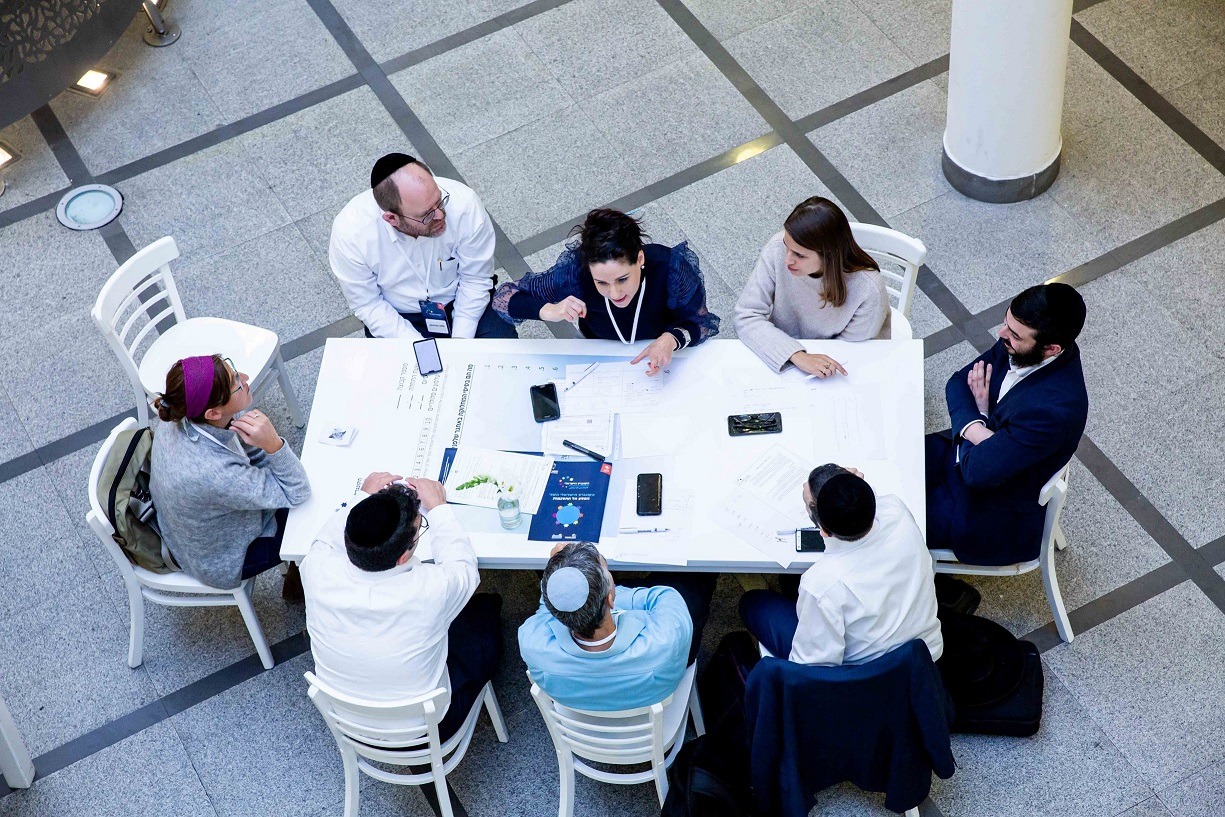 “To me, the Local Agreement Councils are a place to share, like a home, a space that allows you to meet the different side, know your neighbors in the city, lay a foundation that allows you to understand what the argument is about, how to share the common space. It’s a seed that gave the first sprouts for change”, said participants of the councils at a celebratory year’s-end meeting they held.

Yehuda Drori, an entrepreneur, lecturer and educator from Bnei Brak who took part in the council in his area, said that “A lot of times we approach the dispute from an emotional place. As if everything was a battle for your home. And that’s fine, because in the end, we’re like a house committee, who want to get along and are able to find solutions”. Meir Putrilech, Modi’in Illit resident and member of the Agreement Council, adds that “Agreement can come from an understanding of the sensitivity, the dynamics and the language”. Gadi Levi, a film director and Meir’s fellow Council-member, added that: “and then the disputes are only about ideology – and that’s interesting, because it could act as a stimulation”. Ayla Shani, a Secular Rabbi from the Givataim Council, said: “One of the things we discovered, and that we were willing to agree upon, is that there isn’t just one kind of Judaism, and that that’s OK”.

“I learned a lot, about caring, about not compromising and still staying friends, about how to work together”, said Bezalel Strauber, a Jerusalem activist and social entrepreneur. His friend Ron Lehrman, an activist and hi-tech entrepreneur, added that “I always knew that there are issues in which I don’t understand the other side’s position, and don’t know why they took the approach they did. Say on shutting down roads [on the Sabbath] or preventing non-Kosher food. Thanks to the Council and people I met through Bezalel, I learned that in the end they’re people like me, even if their values are different”. Rabbi Yoel Dahan from Ashdod said that “I learned to feel the person in front of me, sense them, be considerate towards them, to try to understand them even when they’re yelling, why they’re yelling”.

In light of the project’s success, the Israeli Congress now plans to expand it to other parts of Israel. Following the success, the New York Federation has also joined the effort, supporting its expansion to further places.

In order to do this, volunteers are now needed to serve as leaders of the activity in their home areas. Who is suited to the task? People who care about Israeli society, who know their community well and are involved in it, and are willing to devote time and energy to assist it. Naturally, such a project must be approached with a great deal of willingness to listen, to learn and to get to know people with different views and traditions. The Israeli Congress aides the councils with a proven methodology and approach, to create a working method for discussions, agreements and field activities. The leaders undergo special training, receiving tools that help them carry out their mission in the best possible way.

“Agreement Councils are the arenas in which the tools and know-how developed by the Congress change reality”, says Congress Director Gilead Wiener. “We know from many studies and surveys that in many cases, the problems begin at a specific local flashpoint”.

Strauber, a Jerusalem Council member, agrees: “We need to take the government and municipalities out of the process and let the grassroots, a neighborhood Agreement council, to create the solutions”. The other participants chime in: “It could have happened in politics, but there the exact opposite is happening. So it has to come from below. It’s not a question of can or can’t we reach an agreement. The question is whether we have the privilege to avoid that friction. Without that, how are we a people? Without that, how are we a society?”.

We’re Waiting For You!

“We’re looking for people to lead the councils who are deeply rooted in their city. People who know the characters of the different neighborhoods, their interests and needs”, said Wiener. Other participants added from their own experiences: “The right people for leadership positions are the ones who create change, who want to do good, idealistic people who care. These are people who know how to have a meaningful dialogue with people of other views, and can motivate others to join processes”.

*The Israeli Congress is a Strategic Philanthropy project of the Menomadin Foundation, focused on strengthening Israel’s social resilience.