Founding CEO of the Menomadin Foundation

Dr. Merav Galili specializes in creating and implementing innovative practices, designated to produce social impact. The Menomadin Foundation she is leading, supports dozens of organizations and ventures, domestic and international, by implementing a unique approach, which combines social initiatives with for-profit activities. Thus, this Blended Finance Approach merges, in effect, impact and social investments that are based on human, creative and economic resources. Hence, alongside financial return, the foundation’s investments are intended to yield nothing less than long-term social impact and reality change, whilst using an orderly, measurable and result-oriented methodology.

Dr. Galili started out in the academic world, in which a quality process is significant in ensuring quality product, and therefore sees quantitative measurement and validation of the foundation’s activity impact as an integral part of its investment process. Galili is leading the Menomadin Foundation to take responsibility for the processes it’s involved in, to initiate international processes, and to structure its investments so they would benefit reality in a sustainable manner.
The change she wants to see in the world is advanced by the Menomadin Foundation in several ways of work: Impact Investing in companies and start-ups developing products and services that can do good in the world in a wide variety of areas, such as agriculture, health, water, energy and education; Strategic Philanthropy, which means direct support for creative social entrepreneurships in different countries; And Cross-Sector Partnerships, connecting private-business, academic, governmental and international sectors in a particular area to intensify results. 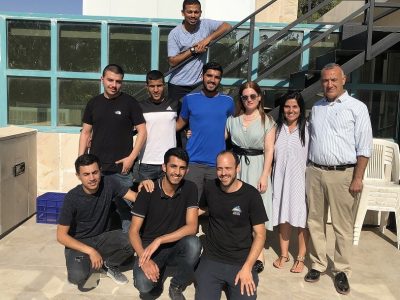 A Vision for a Better Future

In her previous position Dr. Galili served a decade long term at Bar-Ilan University as Head of Global Resource Development, which she completed as Vice-President of Development. A unique partnership between the worlds of academia and business brought her to come across international businessman and philanthropist Haim Taib, today President of the Menomadin Foundation.
Out of his deep concern and sense of commitment to the future of Israeli society, Taib initiated The Israeli Congress – a social venture for the purpose of generating a system of agreements in Israeli society through productive public discourse, guided by applied mediation and dispute resolution techniques.
Merav was deeply impressed by Haim’s vision of making a significant difference in Israel and around the world and decided to join him. In 2019 they established the Menomadin Foundation together, and Dr. Galili was appointed to take the lead as the CEO. 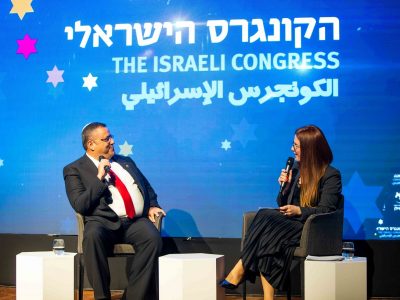 Partnerships as a Vehicle for Social Change

Merav’s unique experience in the University, made composing and applying new partnership models to promote social goals her second nature.
In her capacity as the leader of the Bar-Ilan University Global Resource Development Operations she was responsible, among other things, for developing and implementing the multi-year strategic plan of philanthropic activities in all eight Faculties, managing the fundraising system for its branches around the world, was responsible for defining the university’s development goals, their implementation, and the global fundraising campaign. In 2011, Merav and her team were responsible for raising a record-breaking of more than a hundred million dollars to establish the Faculty of Medicine in Safed.

Changing the World Through Financing

During her time at the University, Merav realized the tremendous importance of implementing new funding vehicles to increase income, other than philanthropy.
She followed world trends where businesspeople and financiers are no longer interested in just “traditional philanthropy”. They seek to follow up on their donations, and to verify that the projects they donated to have achieved their goals. They want a work plan, milestones and valid quantitative measurements for success and failure.
Moreover, she learned that in order to increase the pool of donors and the amounts of the donations, it will be necessary to develop new “giving opportunities” that can also generate financial return.
This approach was particularly applicable in a university context when it came to contributions for research and development of new technologies. Thus, if a research yields a new patent, a company or even an exit, it is only natural for the person who helped making it happen to expect a share of the profits. That was when Merav discovered the world of Impact Investing, where social players have intention to generate positive, measurable social and environmental impact alongside a financial return.
The ecosystem of Impact Investments proved to be successful when Merav led a first-of-its-kind collaboration between the Altshuler Shaham Investment House, Social Finance Israel and the School of Business Administration, to establish a social responsibility-based Capital Market Investment Fund, based on ESG practice and investment training, for MBA students. 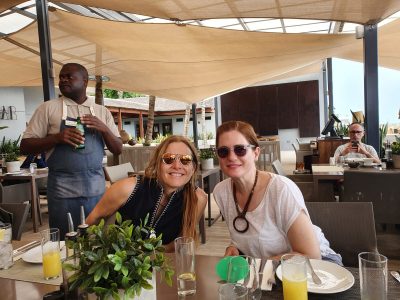 Dr. Merav Galili and Chen Altshuler on a tour of the Menomadin Foundation ventures in Angola.

Dr. Merav Galili was the founder and manager of the Resource Development Unit of the Department of Immigration and Absorption at the Jewish Agency, where she was responsible for raising funds and managing relationships with donors and foundations.
Prior to that, she served as Director of International Partnerships and Assistant Director General of JDC Israel – Ashalim (the JOINT), an organization that provides education and welfare services to children and youth at risk.
Merav started out as a coordinator for a literacy skills program for the Ethiopian Israeli community in Israel. Seeing that as a child Merav had lived several years in New York, and was familiar with the Jewish community in the U.S. and its ties to Israel, she swiftly got promoted to working with International Partnerships. Her responsibilities included fostering the organization’s relationship with the Jewish Federation of New York, donors and other partners.
Although in a new position, Merav continued advancing the benefit of the Ethiopian community in Israel, kept doing so while she was working at the Jewish Agency, and even visited Ethiopia a few times.

Dr.Merav Galili was born and raised in Jerusalem. Today she lives in Tel Aviv with her husband Moshe and their 5 children: Elayi, Shira, Nami, Alona and Daniel.

“In the home I grew up in, excellence and leadership were core values. My father always encouraged my siblings and I to dream, to aim high and to reach for our goals. I made that motto my own. I always dreamed of ‘fixing’ the world and doing good. Thankfully, I met many people along the way who shaped my work and allowed me to realize my dreams. The Menomadin Foundation is undoubtedly a new record in that sense, as it allows me to combine social endeavors, all intended to make our lives and the lives of our children better, with business return. This enables the good we are doing to last, to create a real difference and to intensify.”
Merav Galili, CEO of Menomadin Foundation