Haim Taib at the Menomadin Foundation Impact Event: “There is no greater privilege than Tikkun Olam”

Hundreds of guests attended the special Gala Event held by the Menomadin Foundation, an international impact fund founded by entrepreneur and philanthropist Haim Taib, as a tribute to its many partners in initiatives promoting environmental and social impact in Israel and around the world.

Taib, an international expert in developing countries and empowering communities, is also the Founder and President of the Mitrelli Group, a group of companies that initiates and promotes large turnkey projects in Africa in the fields of agriculture, construction, education, health, water, energy and communications.

Taib opened his speech in the festive event with a story about his grandparents, who immigrated to Israel from Tunisia in the 1950s’ to realize the Zionist vision in the Land of their ancestors.

“My grandparents were the ones who taught me that it is possible to change reality for the better and realize dreams”, he said, “This belief led me to Africa, the same continent from which my grandparents emigrated”.

“There is no greater reward, no greater privilege than promoting tikkun olam”, Taib continued, “but one thing remained in Israel – my heart. I’ve always known that eventually, all the knowledge, experience, resources and models that we develop in Africa, I would bring back to my own country, Israel”. 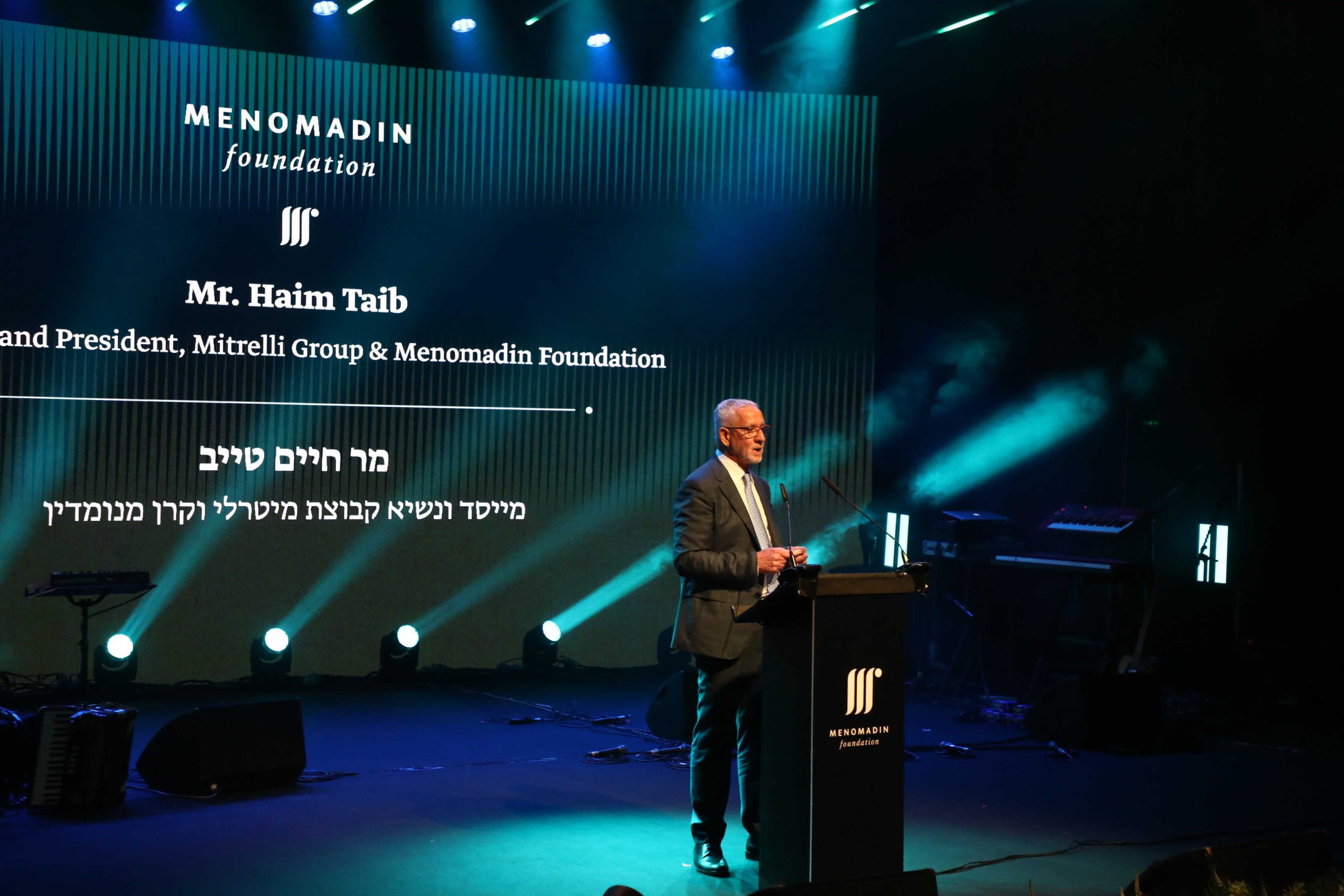 Founder and President of the Menomadin Foundation Haim Taib at the Impact Event: “I’ve always known that eventually I would bring the models we developed in Africa back to Israel”. Top: Haim Taib with Angolan Ambassador to Israel (on the right) and Former President of Angola (left). Photos by: Sivan Faraj

Taib first arrived in Angola in the 1990s’. After the civil war, the new government sought entrepreneurs to help rebuild the destroyed country. Taib met with the president and suggested a vision with a practical plan – to develop both the economy and society through agriculture.

Using models that had been developed by the Zionist Movement prior to the establishment of Israel, and proven successful in providing basic needs such as food security, employment, housing, health, water and education, Taib established rural settlements in Angola by the model of the Israeli kibbutz and moshav. These communities were populated by discharged soldiers from both sides of the civil war, based on the belief that the daily economic activity would encourage them to build a common future. At the same time, Taib established youth villages by the 1960s’ Israeli youth villages’ model, to provide education and training to war orphans.

“Once these models were proven successful, we found ourselves developing Angola on a massive scale”, he said. The activity expanded to establishing large urban communities of affordable housing in peripheral areas, water purification systems to remote villages, sanitation facilities, power plants, hospitals and clinics, schools, agricultural farms and more.

But Taib knew that it would take more than construction to rebuild a nation. The identity of a nation rests upon common roots, which are expressed by the local culture, music and art. For this reason, in 2006 he established the Foundation for Art and Culture (Fundação Arte e Cultura), that promotes Angolan arts, heritage and culture. By the model of the Israeli community center, the Fundação provides hundreds of local children and youth in Luanda enrichment classes and activities, and offers emerging artists and the local community an art gallery, a recording studio, an amphitheater for performances and plays, and a library.

The establishment of the Fundação completed a holistic framework provided for the local community in Angola, with Mitrelli providing housing, nutrition, health and educational security, and the Fundação promoting community spirit and local culture, music and the arts.

“I was always so proud to present Israeli creativity, technologies and innovation to the world, harnessing them to change reality and bring about rapid growth”, said Taib, “The economic and social models we developed on the African continent were based on the Zionist ethos and the establishment of the State of Israel, and no less so – on the values on which I was raised. I am proud and excited to stand here tonight in front of you all, my many partners, and come full circle, celebrating  the Menomadin Foundation, which leverages and harnesses the vast experience and capabilities we have accumulated in Africa and around the world for the benefit of Israeli society”. 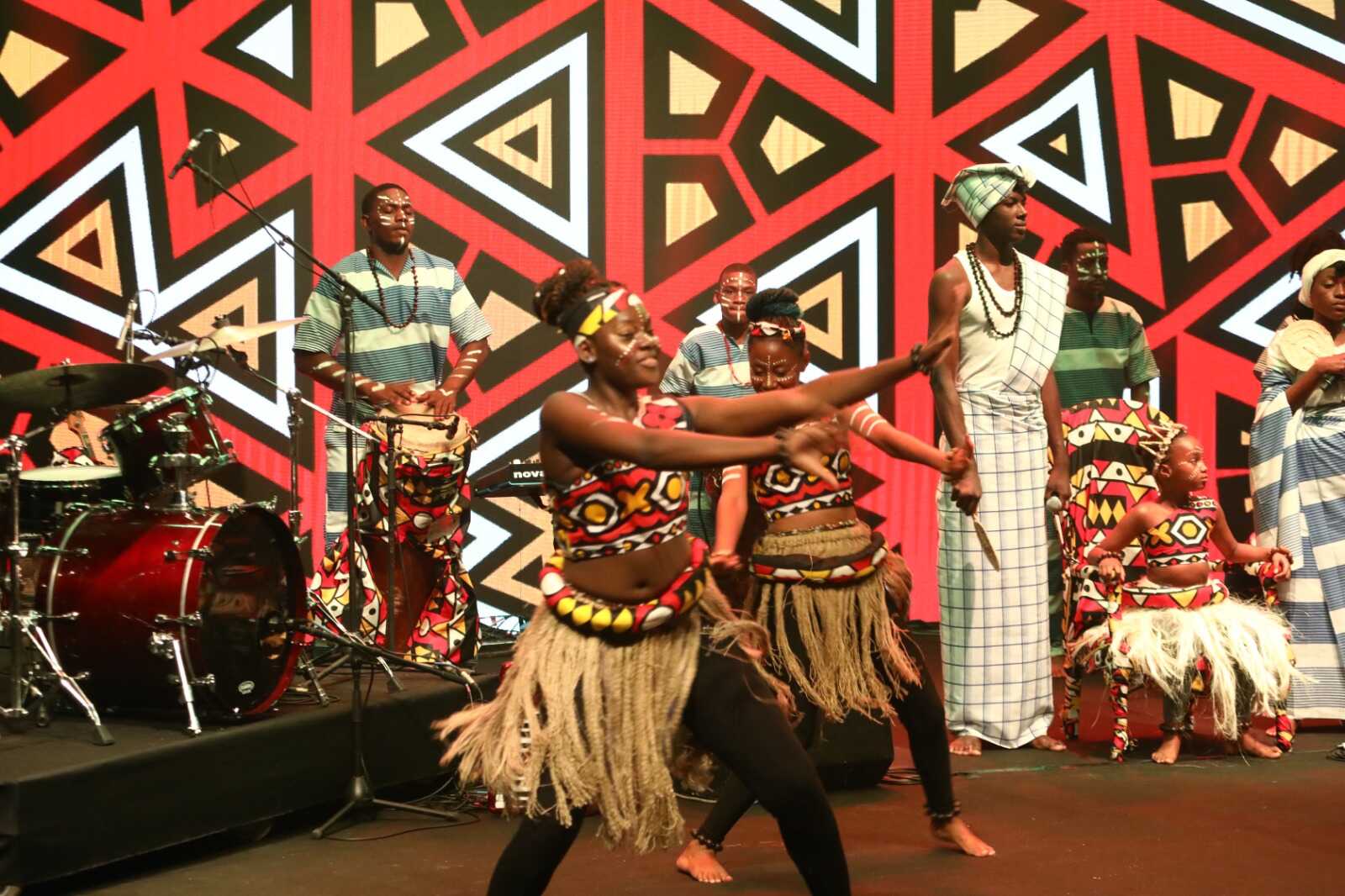 The Menomadin Impact Event: Children of the Fundação Arte e Cultura’s School of Art and Culture performing in the event. Photo by: Sivan Faraj

Also participating in the event was former Angolan Vice President Bornito de Sousa Baltazar Diogo, who spoke about Haim Taib’s continuous contribution to the quality of life of millions of children, women and young people in Angola.

In Israel, the Foundation’s strategic philanthropy initiatives and cross-sector partnerships are designated to promote the social resilience of the State of Israel. In Africa, it operates through its Angolan subsidiary, the Foundation for Arts and Culture, which promotes local culture and arts and empowers women, children, youth and young adults at risk. In addition, the fund is involved in impact investments in Israeli start-ups that develop products and services in the fields of agro-tech, healthcare, and education with reality-changing impact potential.

In the event, which took place at the Tel Aviv Museum of Art, in the presence of ambassadors and states’ representatives, owners of Impact Foundations and NGO managers, academics, hi-tech professionals and senior figures in the business world, the Menomadin Foundation presented its first Impact Report. The report describes the strategic philanthropy, impact investments and partnership initiatives the Foundation is involved in in Israel and around the world. It introduces the Foundation’s impact methodology and practice, presents the background and goals of each intervention, the current impact measurement results, and the impact management practice intended to increase the impact in the future.

“The more we learn how to create meaningful and sustainable changes – the more determined we are to pass on the knowledge and innovative models we have developed to others, and together – find ways to improve and excel, and properly manage the impact we seek to create”, said Taib.

The Menomadin Foundation operates social initiatives the same way it operates impact investments – with a goal and result oriented approach. “In our initiatives, we strive to bring added values, not donations”, Taib emphasized. In this context, he explained that alongside the financial investment and support, the fund leverages the many connections, knowledge and experience accumulated by the Mitrelli Group in order to maximize the impact of each venture.

The event was attended by the Foundation’s diverse partners in its many social initiatives in Israel. “From Tiberias, through Isfiya and Rahat, to Beer-sheva, I congratulate the many partners who are with us here tonight”, Taib continued, “partners who are dreamers, just like us, that are willing to fly and land in order to promote a much stronger and more cohesive Israeli society”.

The most important initiative promoted by the Foundation this year, according to Taib, is the national master-plan “The Right to Good Welfare”. Developed over two years by senior Israeli welfare experts, led by Professor John Gal of the Taub Institute, the plan formulates a strategic roadmap for a comprehensive long-term reform of Israeli welfare services, including practical recommendations that provide decision-makers with a framework to facilitate its implementation. Taib submitted the plan to Welfare and Social Services Minister Meir Cohen in July 2022.

“It has been a great privilege for me to initiate a process that leads to a long-term national reform. When I submitted the plan to the Minister of Welfare, I knew that I found a partner, committed to advancing this historic process”, he said. Taib thanked the Minister and the Ministry’s senior staff for their cooperation and willingness to implement the plan for the benefit of all citizens of Israel.

“In our extensive activities, we have learned that local authorities are an incredible engine for change and growth. I call on the Government of Israel to recognize the power of local governments to make an impact in their jurisdictions. They know the people, they understand the hardships and challenges, they know how to respond quickly and efficiently. In the initiatives that we are promoting in collaboration with local authorities – we are soaring forward”, he said.

But the most important and urgent issue to address, according to Taib, is the polarization and rifts within Israeli society. To this end, a few years ago he founded the Foundation’s flagship project – The Israeli Congress. The Congress is currently collaborating with Bar-Ilan University in developing a methodology for building agreements across the Israeli social spectrum. “I will continue to invest my resources, my time and my abilities to ensure that we can look proudly into the eyes of our children and know that we have done everything possible so that the vision of my grandparents and the founders of the State of Israel continues will be realized”, he promised.

A bridge between Israel and Africa

The event featured a performance by children who study at the Fundação’s musical School of Art and Culture initiative. The children performed a joint musical number they wrote and composed under the direction of the Israeli musician Avner Khodorov, as part of Taib’s activity to create bridges between Israel and Africa in the field of culture as well – an initiative called “Cultural Bridges” (“Ponte Cultural” in Portuguese).

The event also featured the successful Angolan singer Gloria de La Wandro Poster, in a joint segment with Israeli singer and songwriter Avraham Tal. Tal said he was amazed by the children’s performance and the Foundation’s work in Israel and around the world. 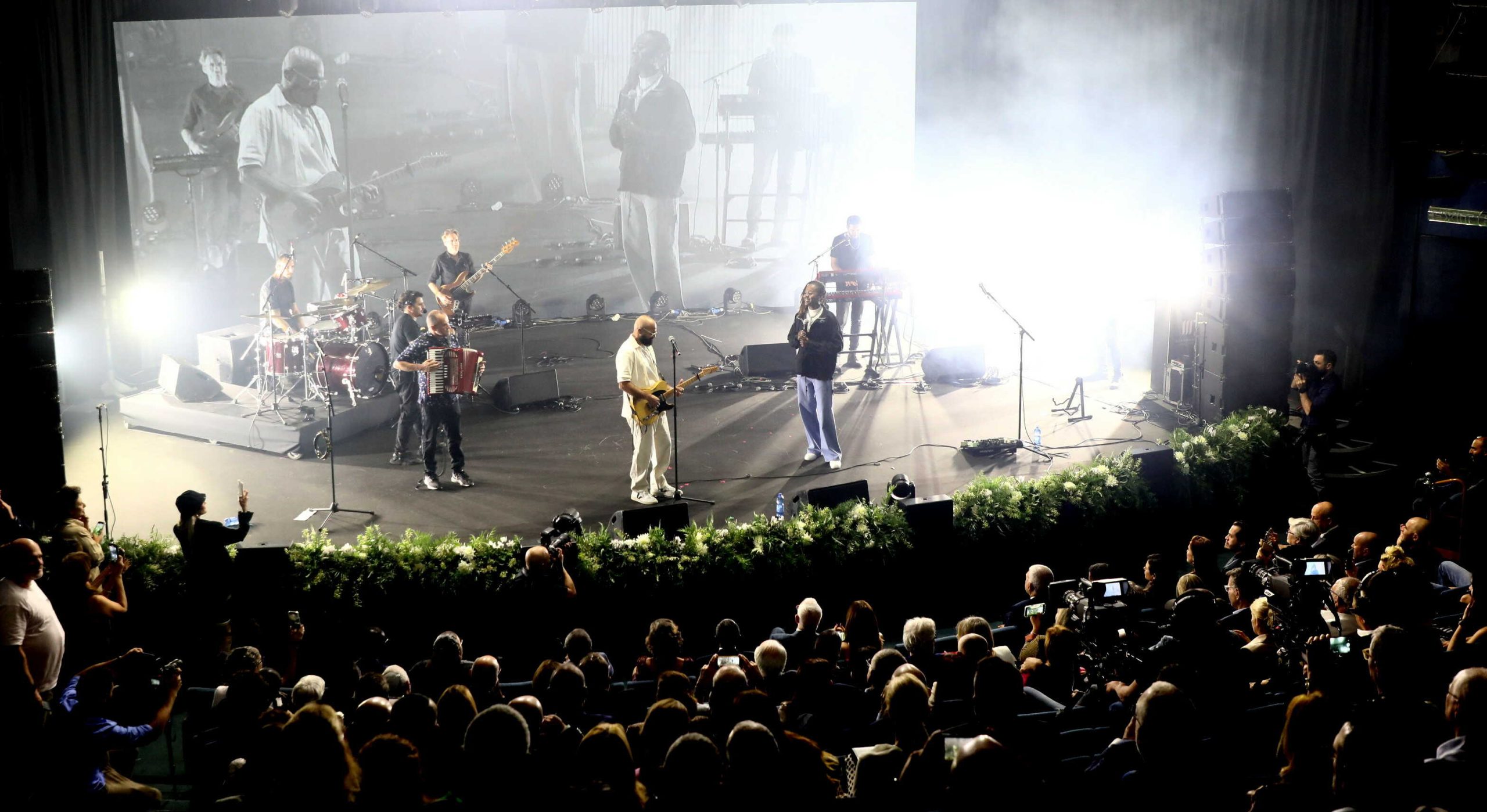