Harnessing the Power of Art, Culture, and Heritage to Empower People and Communities

The Foundation for Arts and Culture, today a Menomadin Foundation subsidiary, was established by Haim Taib with the aim of restoring and preserving Angola’s local arts and culture as the nation emerged from decades of war.

Emerging from decades of destruction, deep divisions, and loss of human lives, post-civil war Angola was facing immense challenges. Alongside the arduous task of rebuilding its destroyed economy and civil infrastructures, the torn nation had to find ways to leave its history of violence and hatred behind.

Haim Taib had been working in Angola for over a decade at that time, initiating and executing high-impact turnkey projects in agriculture, education, communication, construction, and professional training. He witnessed the harsh reality of the grueling civil war and the humanitarian crises it created, and knew that rebuilding the country would take more than “bricks and mortar”.

Guided by the belief that business leaders must contribute significantly to the communities in which they operate, Taib decided to establish a local not-for-profit foundation, that would support the endeavor of creating a new Angolan identity, using the country’s diverse cultural and artistic assets. 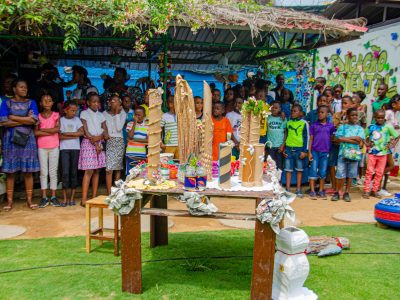 Nation-Building through Culture and Arts

The Fundação Arte e Cultura (the “Fundação”) was inaugurated in 2006 at a high-profile event and received considerable media attention. It started merely as a platform for supporting local talents whose art exemplifies Angola’s culture and heritage, but before long the Fundação established a small community center in the heart of Luanda, which provided the local community enrichment activities and educational opportunities, at no cost.

As Haim Taib’s business activity developed and expanded throughout the country, especially since the establishment of the Mitrelli Group in 2012, so did his philanthropic efforts to advance local arts and culture. In the following years, the Fundação launched an art gallery in Luanda, offering promising emerging painters and sculptures public exposure; the Casa de Musica Conservatory just outside the city, supporting local musicians; and three more community centers in cities across Angola.

As Haim Taib’s business activity expanded throughout the country, so did his efforts to advance local arts and culture. Photo by: Fundação

The scattered activity sites made the Fundação difficult to manage and limited its ability to generate significant and lasting social impact. Taib and the management agreed that the operations had to be consolidated into a holistic framework, in a single location that would enable growth. After a thorough search, the perfect site was located in the Luanda Ilha region.

Although a popular tourist destination due to its lovely coastline and historical riches, the residential neighborhood in the Ilha peninsula suffers considerable neglect, afflicted by poverty, unemployment, and lack of services and resources.

In August 2019, the Fundação Arte e Cultura opened its thriving new Community Center in the heart of the Ilha neighborhood. Inspired by the model of Israeli youth centers, the expansive compound serves as a community-based one-stop-shop as it features an array of facilities, including a spacious yard for outdoor events, an amphitheater for concerts and performances, a community garden, an art gallery, a recording studio, a library and classrooms for the many classes and workshops it offers. 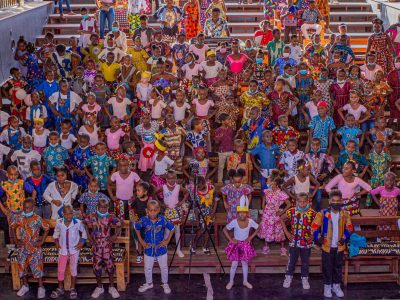 Inspired by the model of Israeli youth centers, the expansive compound serves as a community-based one-stop-shop. Photo by: Fundação

A Symbol of Hope

The center was officially inaugurated at a high-level event in February 2020. In the short time since its establishment, the community center has already earned the recognition of Angolan government ministries, which value its significant contributions to both local and national development, and has become a symbol of hope, impacting thousands of lives.

The center’s School of Arts and Culture offers children and youth various artistic and musical classes. For adults, the center offers basic education classes and creative empowerment workshops for women, such as the Sewing for All vocational training and the Cooperative for Women’s Empowerment. The Fundação also initiates enjoyable educational activities with Luanda’s street children and operates a holistic framework for guiding young adults at risk toward productive adult lives.

The Fundação Arte e Cultura is a member of the Angolan Social Responsibility Network and a National Children’s Institute (INAC) partner. The Fundação collaborates with international organizations, including UNICEF, UNESCO, and the UN.